Having made so much progress on UFOs during furlough, I decided to pull out another stalled project.  It's the Benjamin Biggs quilt.  A reproduction of a quilt from 1848 that was done as a block a month quilt along at Just Takes 2.   I did mine in traditional red/green, but using batiks.  I had 12 of the 25 finished when I stopped working on it in 2014. 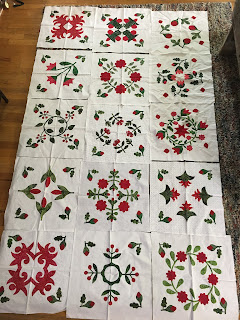 There were 3 additional squares that needed the annoying 4 corner flowers added. 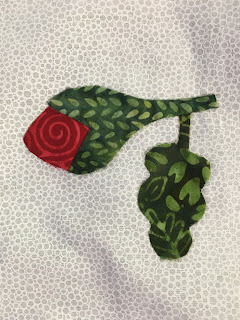 It took a month for me to finish those 12 flowers plus block #16.    I have the next 3 prepped with a goal to finish them by the end of October.  They are a perfect partner to watching football. 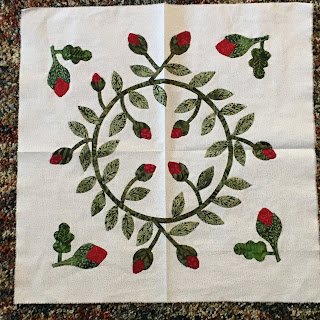 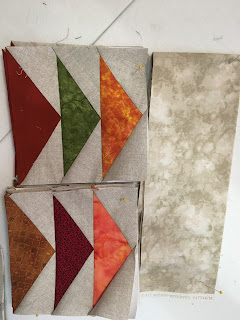 Meanwhile I got sucked into another quilt along that is active.  A paper pieced fall theme quilt from Twittletales.  I thought it would be a good way to use up some rusts and olive greens that I don't usually use.  I failed to realize how annoying it would be to make 100 paper pieced blocks.  I'm a little over 1/2 way done. I've been challenged by using 2 different background colors (didn't have enough of the first which was leftover from another project.) and the fact that I can only stand to sew about 5 blocks at one sitting before I get bored. 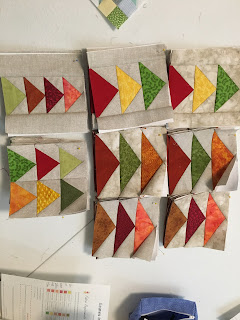 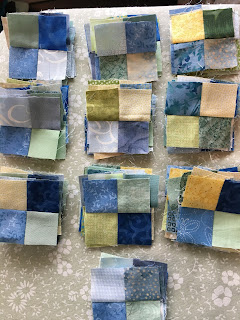 I had a lot of "good scraps" from the Monet quilt.   I should have just thrown them out.  Instead, I started a leader/ender project that resulted in some tiny 4 patch blocks. 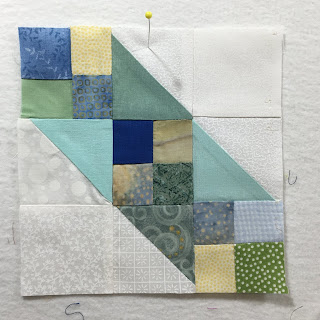 Which after some consideration became this 6" block. 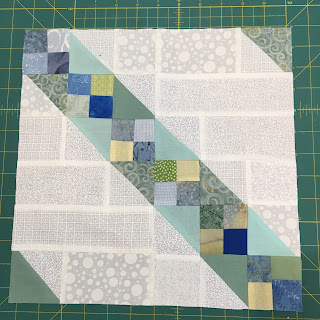 And ultimately a Road To California bonus quilt using up the sea / sage scraps.

The combination of being back to work, and taking advantage of the cool down in the weather to complete another garden makeover in the back yard, has cut into my quilting time.  We'll see what October brings.

I can see why those corner flowers are annoying! But what a beautiful quilt this will be when it all comes together. Awesome work!

Marjorie
Boise, Idaho, United States
A quiltmaker with a love of applique. I continue to try to reduce the stash by attempting to make a dent in the pile of dozens of WIPs/UFOs and sew up some clothing.