After having spent weeks thinking as much about nipples as a man (or a lactation consultant) I've  moved on to crotches and butts.I was going to cut out and sew a bunch of t-shirts today.  Then I decided I really needed to address what I'm going to do with the scraps.  Particularly while the machines are threaded with the right color to get the job done. 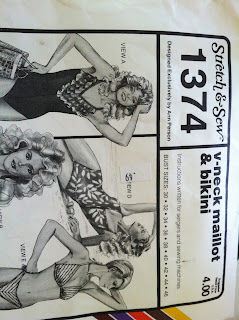 I thought that a bikini pattern might be a good place to start to make some cotton panties with the bits of fabric.

I had purchased some fold-over elastic and ball point needles for this part of the project a couple weeks ago.

After looking at a few tutorials on line, I jumped in....and the outcome of this pattern was terrible.  The bottoms were so big they wouldn't stay on. Details below. 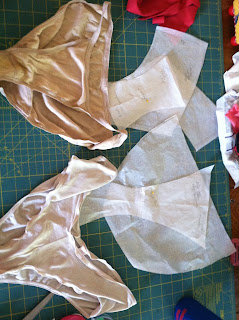 Plan B was to take some of my favorite underwear and trace a pattern from them.

The top version worked out pretty well (photos below).

The lower one,  Oh My!  I will try re-drafting it with an extra 1" in the crotch and another 1" in the front panel.  I have no idea how that one managed to be so off from the original but it was bad enough for the prototype to land in the trash.

On the other hand, it's worth re-working as the fashion fabric is 4 pieces (center seam) which allows for using smaller scraps. 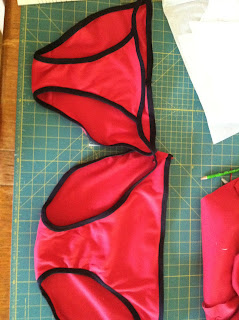 The result was 2 wearable prototypes. I like the finish of the fold-over elastic attached with a zig-zag. Unfortunately, it seems a little "heavy" for an edge of lightweight fabric.  I faced the entire front section rather than just the crotch of this upper version.

The lower version was the bikini disaster.  I removed about 1" on each side of the side seam.  The bum still has extra fabric.  In retrospect, this pattern was probably designed for a lining which would have sucked up 3/8-5/8 of the outer seam allowance.

This elastic doesn't stretch as much as the store version does, so I'll be adding some length to that connecting bit of elastic for the final versions.  I'm thinking about an extra inch of width on the front panel too.

So I'm back to the drawing board.  And moving on to t-shirt knit cardigans.

Posted by Marjorie at 2:40 PM No comments: Links to this post

I finally fixed the neckline on my tshirt trial. I pinned it into place then trimmed off the extra. I was surpised to find that was over an inch. One more small adjustment to the back neckline to avoid some gaping( that is only noticable to me) and I will have a perfectly fitted t shirt. I am staying off the motorcycle this weekend so maybe I will have progress to share. 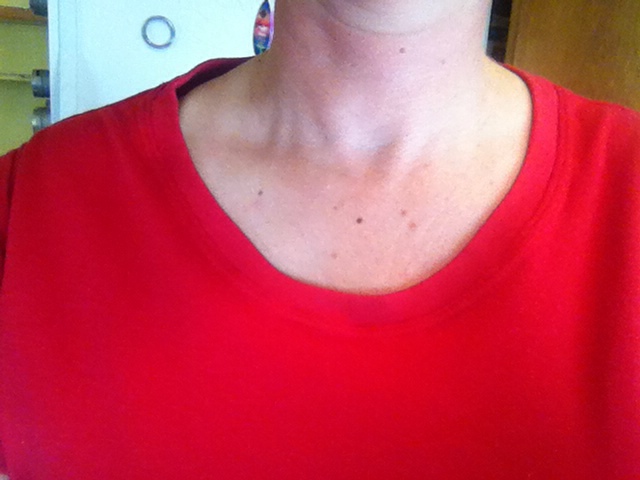 Posted by Marjorie at 7:05 AM No comments: Links to this post 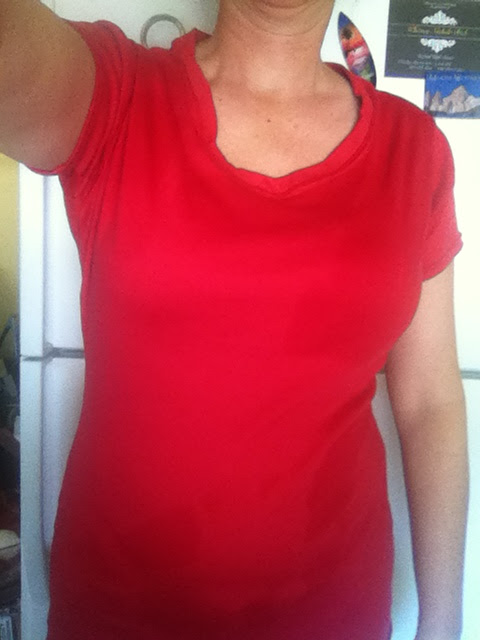 I may need to re-think my hatred for shopping for RTW clothing.

Posted by Marjorie at 3:59 PM 2 comments: Links to this post 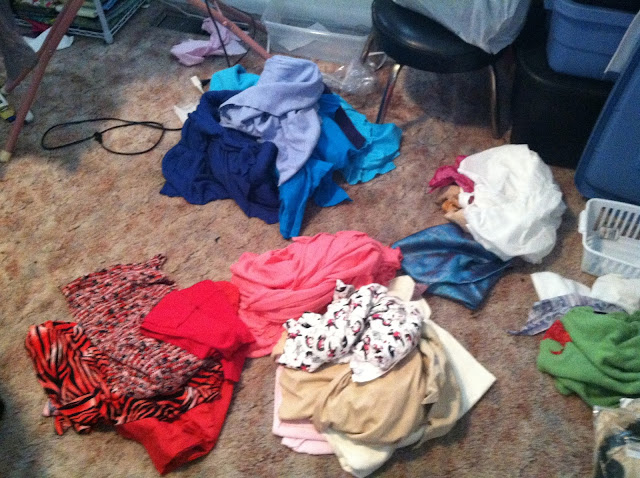 I started my day with grand plans to master t-shirt making.  After the 3rd tutorial I read I became completely paranoid and decided that I needed to pre-wash all the knit fabric I have since I have no recall of if it was washed before or not.  That ended up being 5 loads.  In the process of sorting, I managed to remove a large bag of nasty-textured fabrics, wondered why I have several yards of corduroy (also in the donate bag) and some random fabrics which may or may not be usable for quilting cottons. 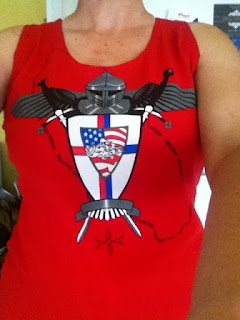 Did manage to find a double needle and just tucked under the raw edges. 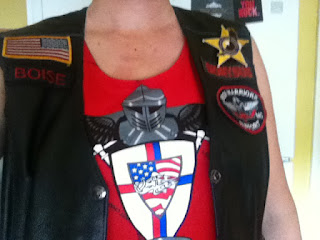 I find it annoying to put an awesome motorcycle logo on the back of a t-shirt which can't be seen when wearing a vest. 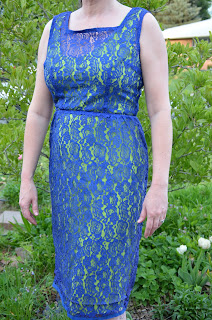 I managed to finally get around to hemming both the blue and green layer of this dress yesterday too. 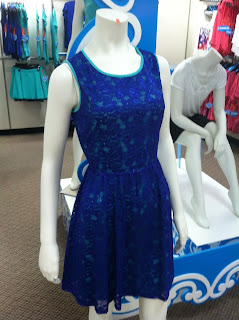 This was my inspiration dress that I saw years ago.  The blue lace dress was part of the retro-stash I had that belonged to my mom.  I cut away the lining and made a tank style dress to wear under it.  My original plan was to make several different colored dresses to wear under it.

(LOL!  Just realized this mannequin looks like how I prefer to photograph myself!)


So, maybe tomorrow I'll make some progress on sewing something from the knit stash.
Posted by Marjorie at 3:24 PM No comments: Links to this post 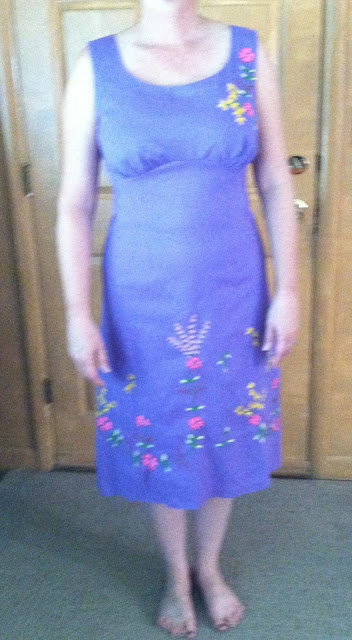 This took forever, but I finally got a dress finished.
Used my fussy cutting skills to add some details to the top. 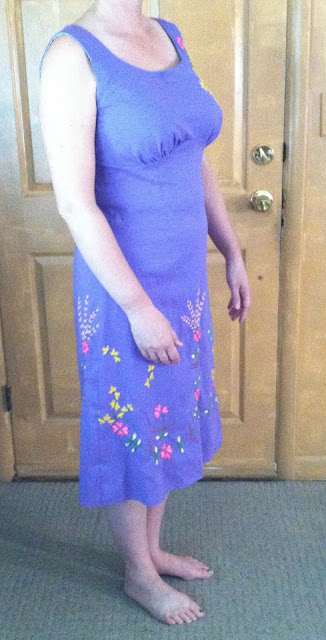 Finally got the boob issue resolved.  Turns out that my nipple line is 6" below the armpit and patterns are drafted for a nipple line at 1.5".  I now have 3 patterns fitted now so hopefully future sewing will go more smoothly.  I've also figured out that a size 14 is the right spot to start, not the 18 that the pattern suggests based upon my measurements.  That revelation prevented neckline issues that have haunted my efforts in the past. 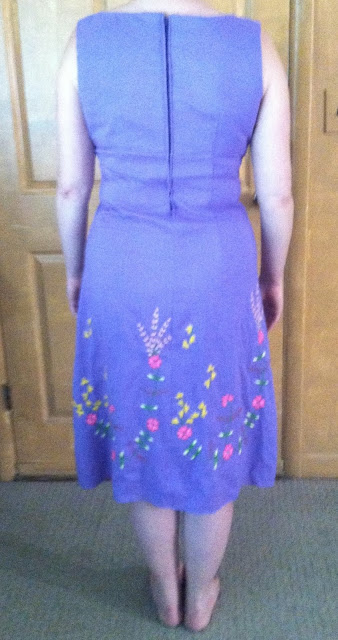 The zipper didn't go as smoothly as I'd hoped, but I think that was related to the lining I added to the bodice.  This view suggest much of my chest measurement is related to  a wide rib cage

I have 3 more of these panels.  Now to decide how to adjust my existing patterns to show off the embroidery / painting that's on them.

Why I don't sew clothes 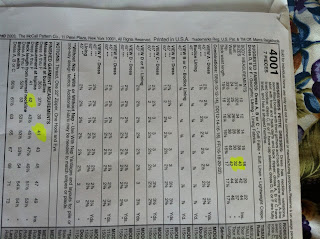 When I learned to sew in Jr High, I was built like a stick figure.  As long as it fit at the shoulders, I could sew any pattern and it would work out with minimal adjustments.

Where to even start?  The measurements say I should be an 18, but the finished garment a 14.  Since I was using a pattern from the stash that only goes to 14, that's what I cut out. 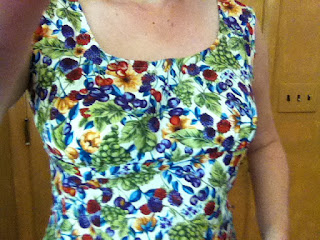 The shoulders and neckline aren't bad.  The waist and darts OK too, though I'll probably add a little more ease on the side seams so it's easier to zip up.

But what's with the boobs? 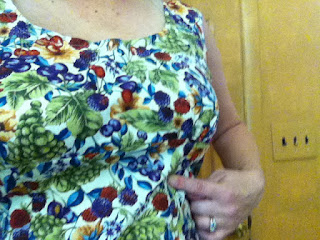 The top of my finger is the bottom of the underwire of my bra. 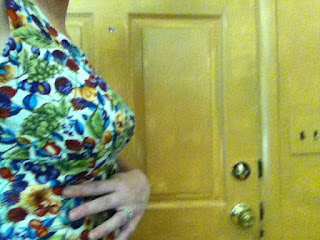 There are 2 more inches that should be included in the bodice top.

It's not like these knockers are over-sized or hanging down around my waist. 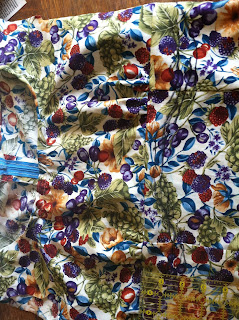 I marked the muslin along the bra line.

Now to figure out a solution. 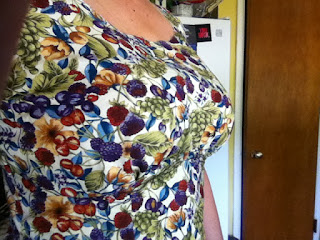 Addendum:  cut out a new bodice piece with some extra volume and changed the front joining seam to be curved.  I think this will work.
Posted by Marjorie at 2:17 PM 2 comments: Links to this post 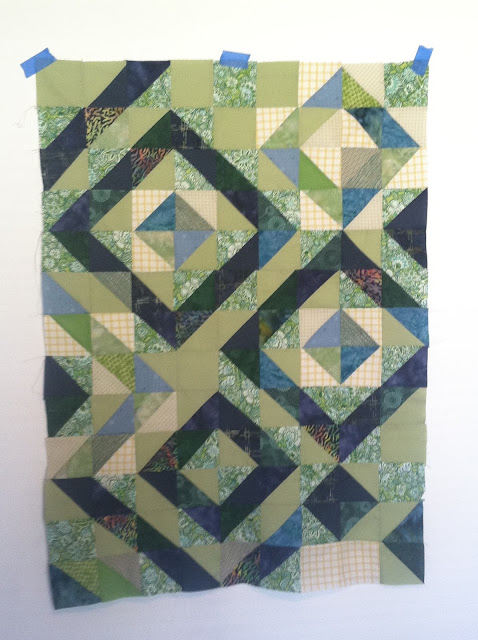 Once again, the plan was to get up early and start sewing clothes.  But this project was in the way.  Used up all the HST I had and sewed this panel together.  This section is 25" x 35".    I am going to set this aside for a while and let the next sections evolve from this and the scrap bins. 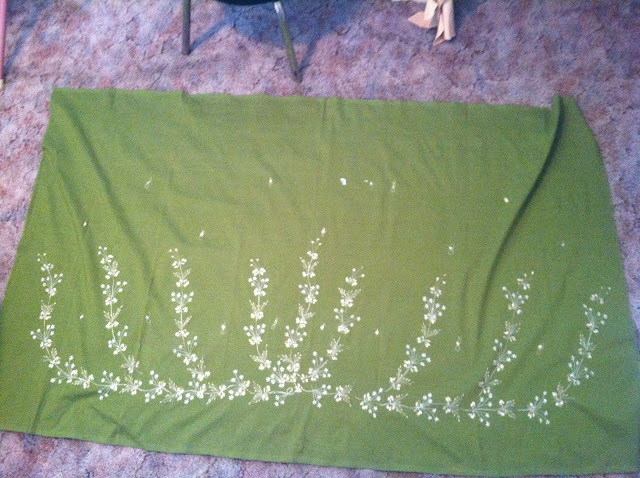 Next on the agenda is to see if I can make a dress out of this fabric.  My mom brought it from her many travels.  I believe it is from Burma / Myanmar.  My understanding is that this would be a traditional sarong worn both both men and women, gathered around the waist.  It  is 42" wide, 68" long.  I may need to do some creative piecing so I can make a knee-length sun dress that takes advantage of the border-print embroidery.
Posted by Marjorie at 11:37 AM No comments: Links to this post

Marjorie
Boise, Idaho, United States
A quiltmaker with a love of applique. I continue to try to reduce the stash by attempting to make a dent in the pile of dozens of WIPs/UFOs and sew up some clothing.